Alongside armed rangers, the participants ran past lions, elephants, and other wildlife. 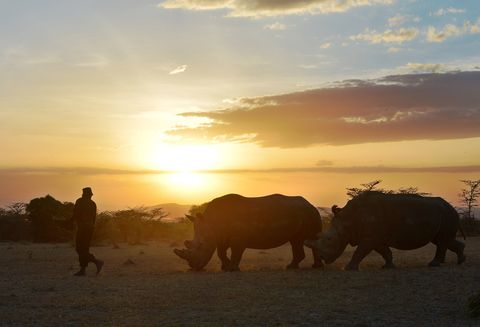 GETTY IMAGES TONY KARUMBA
Although Kenya is known for its long-distance runners, it drew a different running crowd over a recent five-day period to help raise money for a local cause.

Over the five-day period, 50 ultrarunners took to the Kenyan wilderness to raise money and awareness for the country’s rhino rangers, who put their lives on the line to protect Kenya’s rhinos from poachers, according to Sky News. The event was created by three organizations: For Rangers, Beyond the Ultimate and Save the Rhino International.

Runners pass a zebra during the five-day race.
BEYOND THE ULTIMATE

Rhino horns have become popular on the black markets in several Asian countries, making rhinos the target of poachers and criminal gangs. The rangers fight off these criminal efforts to help save the Africa’s declining rhino population. A total of 67 rangers have died on the job over the past 20 years.

Over the course of the run, the racers were accompanied by the rangers protecting the route so it was safe to pass in case of wildlife encounters—runners were likely to see rhinos, elephants, and even lions on the path. Racers trekked the entire 150 miles carrying their own food, water, sleeping bags, and medical kits on their backs.

Eliud Kipchoge presents medals to finishers.
BEYOND THE ULTIMATE

At the finish line, the runners were greeted by special guest Eliud Kipchoge, the 2016 Olympic gold medalist in the marathon, who presented the finishers with their medals.

The run raised more than $77,000 in the process, which will go toward training and equipment for the rhino rangers.