Hugh Jackman has been very open about his skin cancers since first discovering Basal Cell Carcinoma on his nose in 2013.

And as the Australian actor attempts to raise awareness about the disease, which is especially prevalent in his home country, he has revealed to WHO magazine that he has in fact now had four skin cancers in the last 18 months and been told that he is likely to have more as times goes on.

The 46-year-old opened up about how his doctor has tried to keep him calm about his lifelong battle by telling him ‘if that’s your only cross to bear in life, you should be so lucky.’

Skin cancer awareness: Hugh Jackman pictured above after an operation to remove a skin cancer from his nose in October 2014, has been very open about his skin cancers since first discovering Basal Cell Carcinoma on his nose in 2013

Hugh, who is now required to have his skin checked every three months, first revealed he had some cancerous cells removed in November 2013.

Luckily he had the seemingly innocuous mark checked out after his makeup artist noticed a little spot of blood on his nose while he was filming X Men: Days of Future.

At the time the hunky star revealed his wife Deborra-Lee Furness, whom he married in 1996 and has two children Oscar, 14 and Ava, nine, also strongly encouraged him to seek a medical opinion.

‘Deb said to get the mark on my nose checked. Boy, was she right! I had a Basal Cell Carcinoma.

‘Please don’t be foolish like me. Get yourself checked. And USE sunscreen!!! (sic),’ he told his Instagram followers.

The Wolverine star says the second time round he had thought it was just a freckle but this was also cancerous and the third cancer was found after he noticed a bit of blood on his nose.

Worryingly Hugh says he had only had a check-up a week before the third cancer and had been given the all clear.

‘In that one week it had grown, and it was probably the biggest one I had’ he tells the magazine.

And speaking at the premiere of X-Men: Days Of Future Past, China, last year he spoke about the battle saying: 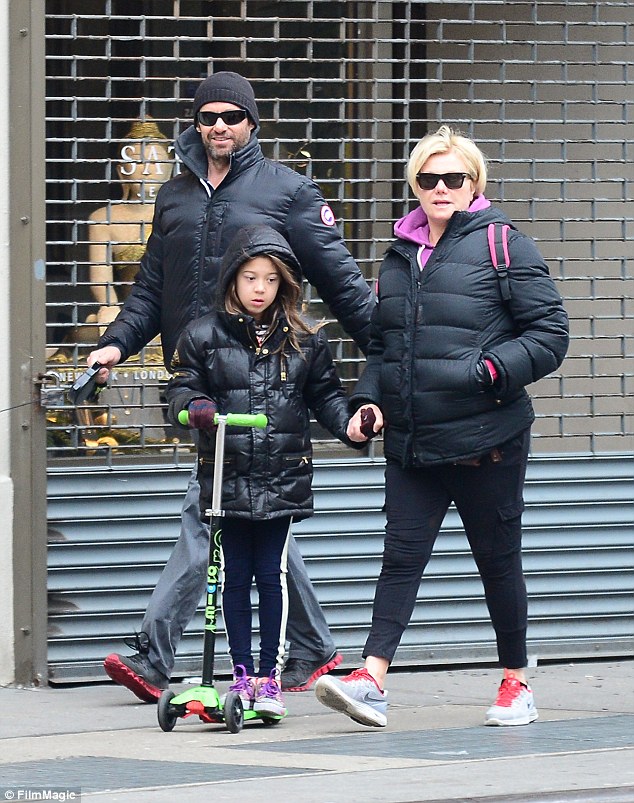 ‘I’m realistic about the future and it’s more than likely that I’ll have at least one more but probably many more, which is not uncommon for an Aussie particularly from English stock growing up in Australia where I don’t remember ever being told to put sunscreen on.’

He added that he is trying hard to stay positive about his health and has been attending regular check-ups.

‘The beauty of this is it’s all preventable, it’s just about getting proper check-ups.

‘I can be typical man, a little lazy, I couldn’t be bothered and now I’m not lazy at all.’

BCC is a common form of skin cancer and treatable, according to the Skin Cancer Foundation.