Nancy Gifford fell into a depression. Here’s how running helped her cope with it. 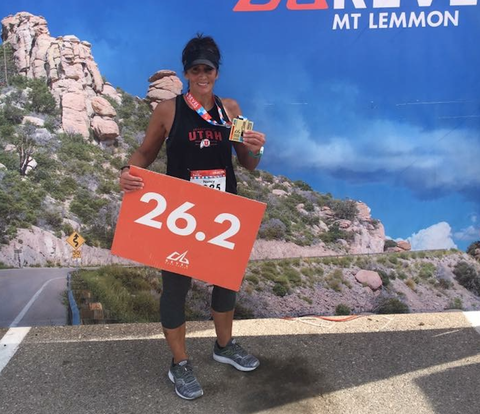 In 2014, Nancy Gifford, now 46, of Herriman, Utah, and her husband, Randy, had been married for less than two years, and were enjoying life with her two teenage sons, Sebastian and Nathaniel.

They decided they wanted to lose a little weight and start feeling better, so they began going for short run-walks. Eventually, they were going two miles, with the goal of running a family 5K (Want to start running? The Big Book of Running for Beginners will take you through everything you need to know to get started, step by step).

But shortly after they took up running, Gifford started having pain in her side. Red flags went off in her head.

“I had been diagnosed with stage 2 Hodgkin’s lymphoma (a cancer of the lymphatic system) in 2005, and I knew something wasn’t right. I was sent to get tests done, and cancer cells were found—again,” she told Runner’s World by phone.

She was diagnosed with a more aggressive cancer than her prior Hodgkin’s: stage 4 nodular lymphocyte predominant Hodgkin lymphoma, a rarer form of Hodgkin’s lymphoma.

“When I asked my doctor how much time I had, he wouldn’t give me an answer,” Gifford said. “I asked him where the cancer was in my body. He said it had spread to all my lymph nodes and major organs. They were going to do what they could as quickly as they could for me. Our whole world was rocked in a matter of minutes. I thought I was going to die from the moment I was diagnosed.”

Two weeks later, doctors started her on intense three-month inpatient chemotherapy, and were preparing her for a stem cell transplant. The plan was grueling: She had a dual port in her chest with two IVs running, in order to give twice the amount of chemo at the same time. She also became septic, with a fever of 104 degrees.

The treatments, which also included regular shots of white blood cells into her femur, left her in incredible pain.

“I would come home from treatments and just cry, begging through tears to my husband to just take the pain away. I kept a journal and I remember writing, ‘Just let me die. My husband could raise the kids. The pain is so bad,’” she said.

Then, during her last round of chemo in August of 2015, she tried to reach her husband by phone after a blood transfusion in the hospital. She couldn’t get through.

“I knew something was wrong,” she said. “My father and son went to his work, where they found him lifeless in his work truck. I was told he had a massive heart attack and had died instantly. My whole world was taken from me.”

Shortly after his funeral, Gifford had another scan done, and learned she was cancer-free.

“I was in remission again, but I was in a dark depression,” she said. “I had been to a couple counselors and was telling my story to them over and over again. But I just needed my own therapy.”

That’s when she started running again. Through the music she played during her workouts, and the simple act of pushing her body, she was able to work through her grief.

“I felt like when I got out there, I was free and open. It was where my mind could actually think, things were clear,” she said. “It gave me a lot of time to think and process things. I turned to that, and once I started, I just kept going.”

In November 2016, she signed up for her first marathon, the Nashville Rock ‘N Roll Marathon that was held in April 2017.

When the race rolled around, it didn’t go smoothly at first. The heat and humidity were off the charts, and Gifford felt very emotional.

“At mile 20, I prayed to my husband, ‘Okay if you’re there with me, this is when I need you the most. Carry me these next six miles.’ I felt so spiritually connected to him,” she said.

Once she made it to the finish line, she was convinced that would be her first and only marathon.

But then, at the airport waiting to go home, thought about it a little more. Because of the extreme conditions, she didn’t do as well in the race as she knew she could—and she thought she could do better. So she signed up for another marathon just six weeks later.

“EVERY MORNING I GET UP, AND I AM SO GRATEFUL THAT I’M ABLE TO RUN.”

Since then, Gifford has run four half marathons and five more full marathons. She’ll run her seventh full marathon in Seattle this August.

Gifford’s cancer has been in remission for two years. Although full marathons are getting harder—a lot of the cancer was in one of her hips, making long runs more taxing—she plans to keep running to honor both her husband and her health.

“Every morning I get up, and I am so grateful that I’m able to run,” she said. “I’m able to get up and go—I wasn’t able to do that for the longest time. Because of the cancer, I don’t take anything for granted. I make the best of every day that I have.”

Happy National Peanut Butter Day😋 Intro – Where did it all begin? When Marcellus Gilmore…

Intro The last 15 Km were difficult. I hadn’t been on a bike/ indoor bike…