Only 50 years ago, women were barred from running marathons in the U.S. Here’s why, and the story of the woman who broke that barrier in 1967.

Only 50 years ago women were told they were too fragile to run marathon distances, which were for male runners only. Some experts claimed that women’s health would be damaged by long-distance running.

That all changed when 20-year-old Kathrine Switzer mailed in the forms to register for the race under her gender neutral initials “K.V. Switzer” in 1967. (Technically, the first woman to run the Boston Marathon was Roberta “Bobbi” Gibb the year before in 1966, who was denied a registration number and ran unregistered by hiding in the bushes near the start line and then jumping into the race. But Switzer was the very first woman to get a bib number!).

A dramatic scene ensued when Boston Athletic Association race co-director Jock Semple angrily grabbed at Switzer around mile four and tried to throw her off the course and pull her bib (# 261) off in the midst of the race. 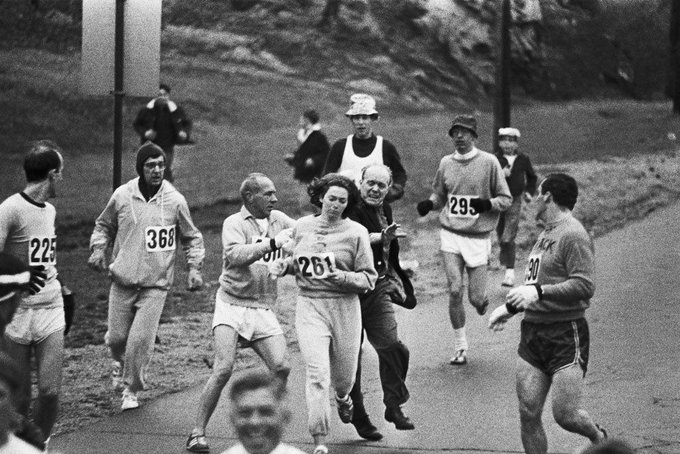 Switzer was able to defy Semple with the help of her boyfriend Tom Miller, a 235-pound football player, who was running alongside her. She went on to complete the race in four hours and 20 minutes, but Semple later disqualified her for running with men.

The race officials said that they were only enforcing the rules that forbid women at that time from competing in races longer than a mile-and-a-half. Switzer and other women runners tried to convince the Boston Athletic Association to allow women into the marathon. Finally, five years later, in 1972, women were officially welcomed to run the Boston Marathon for the first time.

According to the Boston Athletic Association, Boston was the first major marathon to admit women and this opened the floodgates for women’s participation globally.

Kathrine Switzer went on to run the Boston Marathon eight times, and posted her personal best time of two hours and 51 minutes in 1975. Switzer played a major part of getting the women’s marathon accepted officially into the Olympic Games in 1984.

In 2014, for the first time in history, 61 percent of U.S. half-marathon finishers were women, and the percentage of female marathoners is getting much closer to 50 percent, according to Running USA State of the Sport Reports. As of 2015, Running USA reports that the marathon with the highest percentage of female finishers is the Wineglass Marathon in New York, which is 60 percent female.

This year, Switzer is running the 121st Boston Marathon again, at age 70 and she explains why on her website. She focuses on creating change via 261 Fearless, a non-profit she founded that is described as “a global community of women who have found strength, power and fearlessness from putting one foot in front of the other.”

Go # 261, who paved the way for women runners everywhere. We’ll be cheering you on all the way!

Happy National Peanut Butter Day😋 Intro – Where did it all begin? When Marcellus Gilmore…

Intro The last 15 Km were difficult. I hadn’t been on a bike/ indoor bike…